Researchers from the University of Surrey and University of Rennes have developed a technology called the multimodal transistor (MMT), which could revolutionise electronics by simplifying circuits and increasing design freedom.

The multimodal transistor is a thin-film transistor that performs the same job as more complex circuits. The MMT sandwiches metals, insulators and semiconductors together in a package that’s considerably thinner than a normal circuit.

However, the key breakthrough with the MMT is its immunity to parasitic effects (unwanted oscillations). The MMT allows consistent, repeatable signals, increasing a transistor’s performance. This is necessary for precision circuits to function as intended and is especially useful for next-gen tech like AI and robotics.

In the image below, we can see the design of the MMT. CG1 provides the means to control the quantity of charge, while CG2 is the channel control gate. CG1 controls the current level and CG2 controls the on/off state. 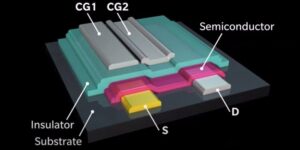 This is a massive shift in transistor design because it enables far greater engineering freedom. It is a simple and elegant design, yet it is so useful. It has numerous applications in analogue computation and hardware learning.

MOSFET transistors are one of the building blocks of modern electronics, but they are non-linear and inefficient.

In a conventional circuit, gate electrodes are used to control a transistor’s ability to pass current. The MMT works differently. Instead of using gate electrodes, it controls on/off switching independently from the amount of current that passes through. This allows the MMT to operate at a higher speed with a linear dependence between input and output. This is useful for digital-to-analogue conversion.

The breakthrough in all its glory

The MMT transforms the humble transistor into a linear device that delivers a linear dependence between input and output. It separates charge injection from conduction, a new design that achieves independent current on/off switching.

There is a profound increase in switching speed as a result of this technology, enabling engineers to develop faster electronics. Researchers estimate that the switching speed is as much as 10 times faster. Also, fewer transistors are needed, increasing the yield rate and reducing the cost to manufacture the circuit.

Just how revolutionary the MMT will be remains to be seen. After all, this is a technology without commercialisation. It could find its way into the electronics we use on a daily basis, like our phones. The potential is for the MMT to be printable, allowing for mass production and integration into billions of electrical devices.

With devices getting smarter and digital transformation advancing at a rapid rate, the electronics industry is booming. Semiconductor foundries are at peek capacity and more electrical devices are being sold than ever. The MMT is a unique solution to a problem, and it could make manufacturing electronics cheaper.

With this, comes a great opportunity for the MMT to replace MOSFET transistors. We can think of few other design philosophies with such wicked potential.